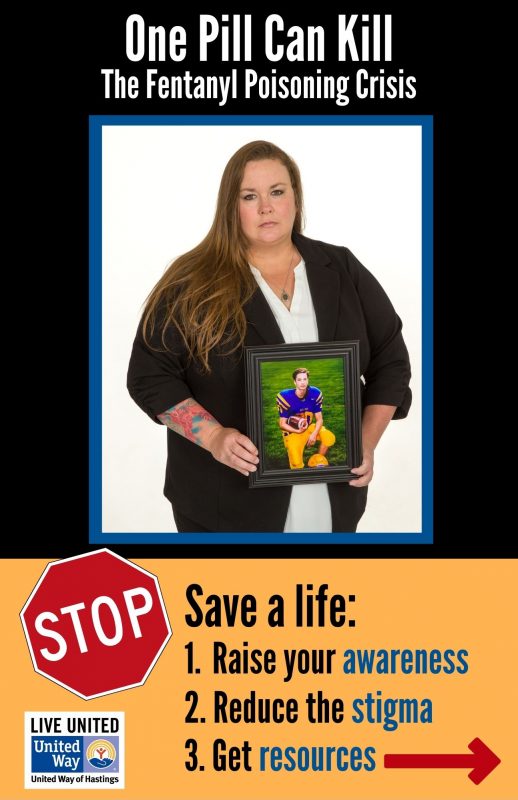 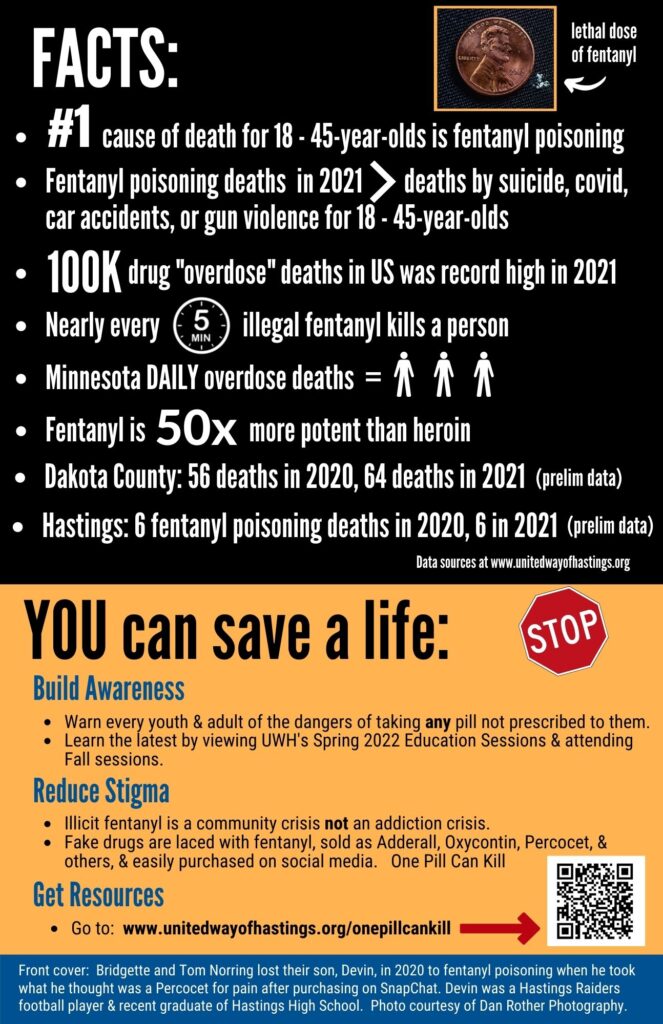 One Pill Can Kill Resources

What Every Person in Hastings MUST Know

According to the CDC, overdoses and drug poisonings are now the leading cause of death in Americans ages 18 – 45. Illicit fentanyl is responsible for the majority of those deaths. This is both a national and local crisis.

Fentanyl IS in Hastings. Illicit fentanyl is laced in pills looking like pharmaceutical drugs such as Xanax, Percocet, Adderall, etc. It’s also cut into heroin, methamphetamine, cocaine, and marijuana. 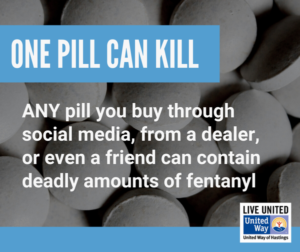 Fentanyl Poisoning & Why I Should Care – Local Updates

Speakers, followed by a Q&A discussion 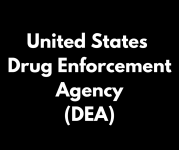 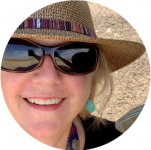 Presented in partnership with Allina Health. 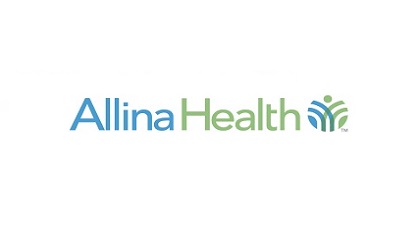 What Every Person in Hastings MUST Know 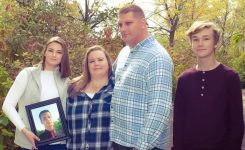 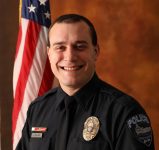 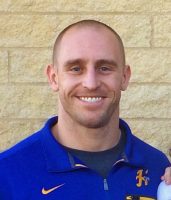 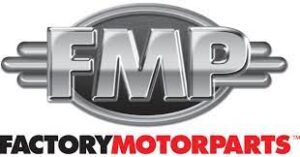 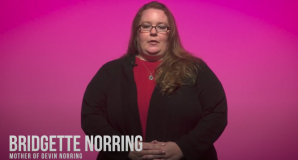 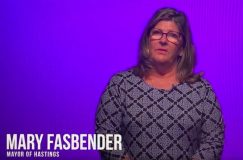 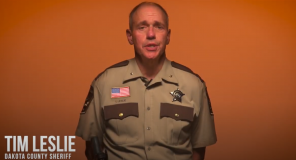 UWH does not support or oppose political candidates 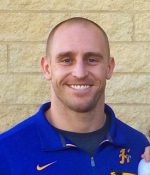 Drew Cooper is a school counselor at Hastings High School for students with the last names M-R and AVID students. Drew completed his undergraduate degree from the University of Florida and his masters degree from Concordia University – Chicago. Prior to moving to Hastings, Drew was a teacher, counselor, ALC coordinator, and coach in the Chicago area for ten years. Drew has been at Hastings High School for the past six years as a counselor, coach, and co-curricular sponsor. He enjoys spending time with his wife, Brianna, and his two daughters (ages 4 and 7).

DTF Agent with seven years of experience as a police officer and one year as a DTF Agent will be presenting.  Agent is a drug recognition expert among other special assignments with a specialization in fentanyl, heroin, and opioids. 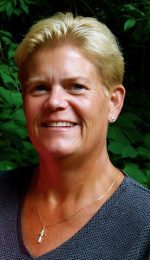 Ann Lindberg has been the Director of Chemical Health for the West St Paul-Mendota Heights-Eagan School District since 1999. She completed her bachelor’s degree in psychology and has been a Licensed Alcohol and Drug Counselor (LADC) in Minnesota since 1998 and a National Alcohol and Other Drug Abuse Counselor (NAODA) since 1986. Ann has worked in inpatient, outpatient and residential dual diagnosis settings as a therapist and administrator specializing in the treatment of adolescent chemical use and abuse.

From 2013-2020 Ann served as the chairperson for the Minnesota Association of Resources for Recovery and Chemical Health (MARRCH) School Section, a group working within secondary schools. MARRCH is a non-profit professional organization of chemical health agencies and individuals striving to raise awareness about chemical dependency and the power of recovery.

In 2014, Ann was recognized by the Dakota County Attorney’s Office and County Attorney James Backstrom with the Citizenship Award. Ann received this award, “In recognition of her dedication, commitment and outstanding leadership in chemical health and violence prevention initiatives on behalf of youth in Dakota County.”

Today, teen vaping and counterfeit drugs along with teen drug abuse continue to be a major concern in schools and communities across the nation and things are no different in Dakota County. Ann Lindberg-Borgen, Chemical Health Coordinator for District #197 continues to work diligently to provide prevention, education, intervention, and resources to teens and their families. 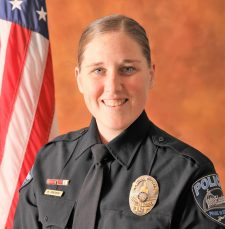 Officer Whitney Rinowski joined the Hastings Police Department as a patrol officer in 2014. Over her 8 years of service as an officer, she has looked for opportunities to engage with the community beyond patrolling the city and responding to calls for service. Moving into the Community Engagement Officer position in 2021, Officer Rinowski has expanded her community outreach abilities and has collaborated with various community members to improve the quality of life for those who live and work in the City of Hastings.

Joe joined the Dakota County Sheriff’s Office in September 1997.  Over his 24 plus years with the Office he has served a variety of roles including court security, transport, school resource officer, patrol, recreational safety, drug task force investigator and gang investigator.   He was promoted to Sergeant in 2006 and assigned to patrol.  He spent six years with the Dakota County Drug Task Force two of which as the Commander overseeing operations.  He served 11 years as a SWAT team member and was a certified explosive breacher.  In 2011 he was promoted to Captain and assigned to patrol and then the jail and courts before Sheriff Tim Leslie appointed him to serve as Chief Deputy in 2015.  He oversees a $24 million budget and a staff of over 200 employees.

Joe holds an Associate of Arts Degree in Law Enforcement from Inver Hills Community College, a Bachelor of Science in Natural Resources and Environmental Studies from the University of Minnesota and a Master of Arts in Public Safety and Law Enforcement Leadership from the University of St. Thomas.  He is a graduate of the FBI National Academy in Quantico, Virginia, Session 264 in the spring of 2016. 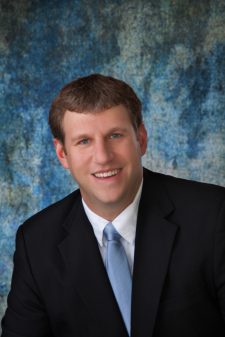 Charlie Black is the school counselor for 8th graders at HMS. Charlie grew up in Hastings and is very happy to be back in the community. He completed his undergraduate degree in Psychology at St. John’s University and then went on to earn a Masters Degree in Education Counseling at the University of Wisconsin – River Falls. Charlie then moved back to Hastings and began his career in school counseling at the Hastings Middle School in 2004. He enjoys camping, fishing, and spending time outdoors with his wife, Melissa, and his two boys. Charlie was honored as the Employee of the Year in 2012-2013 for Hastings Public Schools. 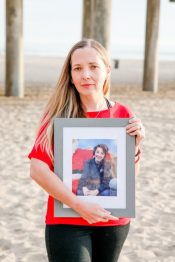 Since losing Alexander, I have dedicated my life to educating and spreading awareness of the dangers that killed him. If you know me already or have seen my work, you know that I cannot say enough about the pain of losing my baby, but this is bigger than one fourteen-year-old. So many more adolescents and people of all ages are having their lives cut short through no fault of their own.

It is my mission to bring light to this issue and advocate for changes. In the last year, I have met with students, school counselors, school boards, PTAs, Scout troops, DEA agents, prosecutors, every county sheriff in Southern California, State and Federal politicians, and many more people to share and learn what WE can do to help. This is a difficult hill to climb, but I know that our efforts are helping. 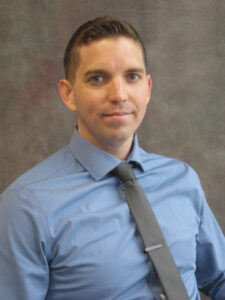 Justin is a Master of Addiction Counseling: Advanced Practice, graduate of Hazelden Betty Ford Graduate School of Addiction Studies, and is working at Allina Health Hospitals to assess and refer patients to addiction treatment.  Allina Health is building an intensive outpatient chemical dependency treatment program in Hastings at the Nininger Clinic, where Justin will be the lead clinician. 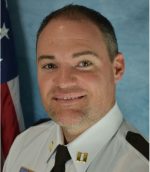 Bryan holds a B.A. in Criminal Justice and Social Science with a minor in Political Science from Bethel University in St. Paul. 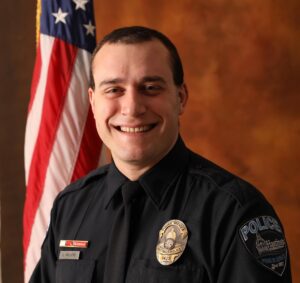 Jake Willers has been a Police Officer for six and a half years and has been a School Resource Officer for the City of Hastings Police Department since 2020. Officer Willers is also a part of the Hastings Police Department Mental Health Crisis Team. Officer Willers attended Minnesota State University Mankato and received a bachelor’s degree in Law Enforcement along with an associate’s degree in Psychology. 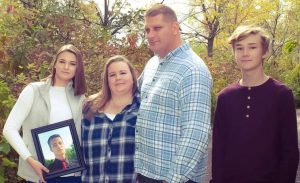 Bridgette is a mother of three from Hastings, MN. At the beginning of the pandemic in 2020, Bridgette left her job with the State of Minnesota’s Department of Public Safety to care for her family. Shortly after, Devin, her oldest son, lost his life to a counterfeit pill he believed to be Percocet. That counterfeit pill contained a lethal dose of fentanyl. Devin, a recent 2019 graduate from Hastings High School, was only 19 years old at the time of his death. Devin had plans of visiting California the summer of 2020 to explore the colleges that would help him further his music career that he was passionate about. A single counterfeit fentanyl pill erased all of Devin’s hopes and dreams when it claimed his life.

Bridgette along with her husband, Tom, and children, Hayley and Caden realized quickly after losing Devin the urgency in raising awareness and educating as many people as possible in hopes of preventing the loss of another life to fentanyl. Bridgette has been working closely with her local United Way of Hastings, City officials, County Drug Task Force, City Police, Minnesota State Legislators, educators, and fellow advocates dedicated to the cause.

Bridgette has always been dedicated to her family. Her family will be expanding shortly with the much anticipated birth of her first grandchild. 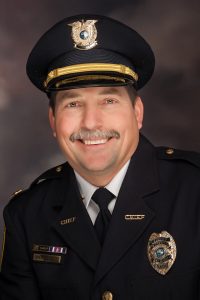 Chief Bryan D. Schafer is a 38-year veteran of law enforcement.  He served nearly 23 years with the Minneapolis Police Department and before being appointed as the Police Chief for the City of Hastings in November 4, 2013.

Schafer completed his Associates Degree in 1984 and his Bachelor’s Degree at Metropolitan State University in 2005, graduating with honors. His senior thesis, “Police and their Perceived Image:  How Community Influence Officers’ Job Satisfaction” was published in the Police Practice and Research: An International Journal (PPR), February 1, 2009. Schafer is 2008 graduate of the Police Executive Research Forum’s Senior Management Institute for Police and a 2005 graduate of Northwestern University Center for Public Safety’s, School of Police Staff and Command.

In 2006 Schafer was instrumental in collaborating with community/criminal justice partners to influence juvenile justice reform in Hennepin County resulting in significant decreases in juvenile violent crime and was presented with the 2007 Leadership Award.  These successes were further recognized by his peers when Schafer received the Gary P. Hayes Memorial Award while attending the Police Executive Research Forum’s Annual Meeting in Washington D.C. on March 26, 2009.  The Gary P. Hayes Memorial Award honors the memory of PERF’s first executive director, who helped lead a major wave of improvements in American policing. Schafer also received the IACP/Motorola Webber Seavey Award on October 7, 2009 for promoting a standard of excellence that exemplifies law enforcement’s contribution and dedication to the quality of life in local communities. Schafer has also participated in three documentaries: Urban Warfare, Discovery Investigation, and The History Channel.

As Police Chief for the City of Hastings, Schafer has instituted organizational change by creating the Deputy Police Chief and Patrol Commander ranks.  These new positions helped establish a clear chain of command and job responsibilities resulting in a positive, high functioning, department balanced with firm/fair accountability. In his tenure, he has hired/promoted three-quarters of today’s employees. A 4-year degree is required of our new police officers and those aspiring to be or who have assumed supervisory roles must complete a supervisory training series.  In addition, he reopened the public service counter, implemented Body-Worn Cameras, participated and initiated Domestic and Sexual Assault protocols established by MN CASA and 360 Communities.  The collaboration with 360 Communities and Dakota County brought about on-site advocacy and community services coordinators at HPD.  Schafer formerly served as the President of the Dakota County Chiefs of Police Association, served on the Violence Against Women Act (VAWA) grant oversight committee, Electronic Crimes Joint Powers Committee, Adult Detention Alternatives Initiative Executive Committee (ADAI), and United Way of Hastings Board of Directors. 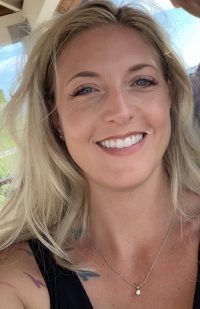 Tiffany Neuharth is the Executive Director of RISE UP Recovery, a Recovery Community Organization serving Hastings, MN, and surrounding areas. They provide Peer Recovery Support Services, recovery housing, naloxone distribution, training and education. Tiffany is a licensed alcohol and drug counselor and certified peer recovery specialist reciprocal with over 20 years experience in the field of substance use disorder recovery. She speaks to and trains a wide range of audiences, providing education and real-life experiences around recovery. Her goal is to reduce commonly held stigmas and misconceptions around substance use disorders while making recovery accessible to everyone.